The "A Christmas Together" tour was created in December 2010 by Jadon and Stephanie Lavik in Orange County California. At that time, Jadon had been touring for a few years nationally as a full-time Christian recording artist. After sharing the stage with many of the top Christian artists from around the country, Jadon returned home desiring to help create a tour of his own that would be "different". A tour that promoted the group over the individual. A tour that held commercialism to a minimum. A tour committed to celebrating Jesus! A tour that sought to help artists care for the needs of their families during the holidays. A tour that sought to bring people together (multiple churches co-hosting the event, both the churched and the un-churched in attendance). A tour committed to excellence in the arts. A tour that aims for it's audience to feel like they're sitting in the living room of a friends home. These are just a few of the goals the Lavik's aimed for in creating the annual A Christmas Together tour. Over the last 5 years the tour has hosted many friends and artists that have continued on to do great things in both the Christian music industry and elsewhere. For more visual information as to what the tour looks like, visit our videos link to see clips from previous years as well as previous artist lineups. 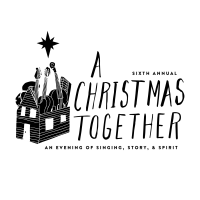