Dr. Cristina F. Keusch lives in Boca Raton, Florida with her husband, Donald, and their two children. She was born in Havana, Cuba in 1958. Dr. Keusch graduated from the University of Miami, Summa Cum Laude, 1979, with a B.S. in Biology/Chemistry. She then graduated from Johns Hopkins School of Medicine, 1983. Her medical training began in 1983 at Mount Sinai Hospital, New York as a resident in general surgery. In 1987, she became the Chief Resident of General Surgery at Mount Sinai. Then in 1988, it was time for her Plastic Surgery Residency, which was completed at Harvard/Brigham/Children’s Hospitals, Boston. In 1990, Dr. Keusch established her practice at the Boca Raton Plastic Surgery Center. Dr. Keusch is affiliated with Boca Raton Regional Hospital. Dr. Keusch as a Plastic Surgeon specializes in Breast Augmentation,Liposuction, Breast Lift and more. 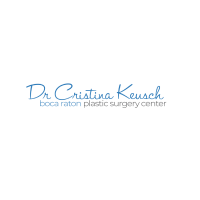