Based in France, Cache Coeur was created in 2008 by Audrey and Philippe Trolliet. Since then, it has grown into a leader on the French market, and a major player in Europe and all around the world, thanks to the quality of its products and innovations. Hundreds of thousands of women have been wearing Cache Coeur designs since the creation of the brand, including French and international celebrities. 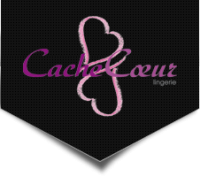