Our public showcases feature four acts in four separate rooms performing four 15-minute sets in a row at the same time. At the end of each set, the audience in each room moves as a group to the next room until everyone's heard all four acts. We close with a longer fifth simultaneous set, 20-30 minutes, where the audience groups break up and people listen to whoever they want. All done in under two hours with free beer! Basic private event package features three acts, no extra set, done in under an hour. 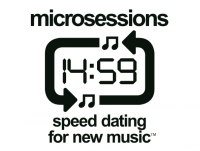