Peace Fires is a global movement uniting people around the world to help raise the consciousness of the planet. We bring people together to send positive intentions to transform negativity and bring peace. We believe it is constructive to focus on what is positive and we choose to focus on what unites us. We are uniting people of all faiths, cultures, and backgrounds around the world to bring peace. People have gathered around fireplaces and campfires since the beginning of time and still do for many occasions around the world. We believe the fire element has the capacity to relieve stress and difficult emotions and at the same time help to generate positive energy and resilience. A fire is warming and draws people near and brings people together. The practice of gathering around an open fire has in recent years become more prominent again. For many people, it has already been a beautiful vehicle to unite both in spirit and in positive action with love and care for oneself, other people, animals, and the planet, and for world peace. Peace Fires began on New Year’s Eve 2016, when thousands of people in 1530+ locations across 68 countries came together for 26 hours to send positive intentions for peace as every time zone entered the New Year.   The movement continues with Peace Fires every Full Moon, Summer Solstice, and New Year’s Eve. Peace Fires are synchronized in communities around the world with a live 8-hour Peace Fire on the Full Moons and 26-continous hour Peace Fire on the Summer Solstice and New Year's Eve. Peace Fires live broadcasts stream positive and relaxing energy for free on YouTube and www.peacefires.org. Let there be peace on earth and love for one another! 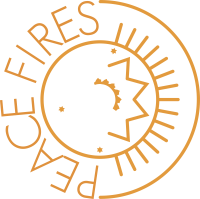