Claudia Harbaugh introduces the first in her series of regency romance novels, "Her Grace in Disgrace". The romance novel tells the story of Isobel Kennilworth Aiken, who in the opening of the story possesses the title Duchess of Warwick, but quickly loses her privilege to become Miss Kennilworth once again. Upon the death of her husband, The Duke of Warwick, the will makes clear that the Duke remains married to another woman with whom he had a son named Reggie. Six year-old Reggie is suddenly the Duke of Warwick and the woman who has been living for six years believing she is lawfully wedded to the Duke of Warwick gets kicked out of British society in disgrace. 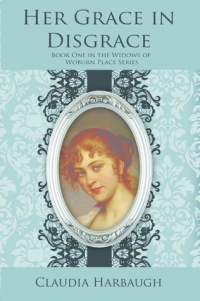