Silver Cove is locally owned and operated by partners Chris and Melissa Robak. The couple began in 2007 with just an $800 investment and have transformed these small beginnings into the largest company of it's kind in Western Canada. Silver Cove operates two permanent storefronts, seven Gem & Mineral trade shows, and several mobile units that setup throughout Alberta. They carry a vast array of specimens and fossils from around the world, priding themselves in carrying the most diverse selection in Canada. Today, Chris and Melissa work with some of the rarest gemstones in the world. They harvest stones from all over North America and, with their exceptional staff, continue to push the artistic envelope in minerals and home decor. 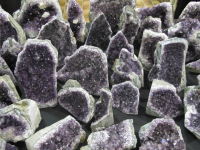