Vegan Sex: Vegans Do it Better Dump Your Meds and Jump in Bed the newest book offered by Ellen Jaffe Jones offers a perfect guide to inspire and motivate vegans who are looking to achieve true health and happiness both in and outside the bedroom. Ellen Jaffe Jones is an inspiring motivational speaker, personal trainer, running coach, author, and instructor of healthy cooking classes. As a former investigative reporter and anchor for 18 years in major market TV news, Ellen won 2 Emmys and the National Press Club award. She became known as the “Earth Mother in a Suit” when she left TV and became a successful Wall Street financial consultant for 5 years. She wrote her first book, Eat Vegan on $4 a Day, after seeing too many news stories saying eating healthfully was impossible on a budget. Ellen, an accomplished endurance and sprint runner, has won 104 5K+ Age Group awards since 2006. She placed 7th in US National Senior Games, W60-64 1500 Meters in 2013, and 1st in Florida’s W60-64, 50, 100, 200, 400, 800, and 1500 meters races in 2014. In 2014 Ellen was also named PETA’s “Sexiest Vegan over 50.” She combined all of her skill sets with her latest release, Vegan Fitness for Mortals. Recognizing that fitness and diet are two sides of the same coin, Ellen developed routines for a variety of activities along with dietary recommendations that augment fitness—a winning combination designed to help anyone achieve a healthier lifestyle. Her other titles include Kitchen Divided which was written for vegans who are sharing a kitchen with an omnivore and Paleo Vegan (co-authored with Alan Roettinger). Ellen researched different versions of paleo diets on the market and was able to combine the essence of paleo diets with vegan principles in a 100% vegan cookbook. Ellen's next books in the next year include "Vegan Sex" and "Vegan for One." Ellen is a Certified Personal Trainer by the nationally recognized Aerobics & Fitness Association of America and a Certified Coach with the Road Runners Club of America. She speaks at numerous VegFests across the country. 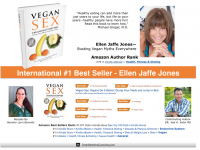